A Saudi man has been chained in a basement apartment for more than six years because his father believes he is possessed by an evil female genie.

'When he has fits he has convulsions and his entire body twists and his eyes become completely white,' said the father of the 29-year-old man who has been identified only as Turki.

'Then the voice of a woman can be heard coming from him.' 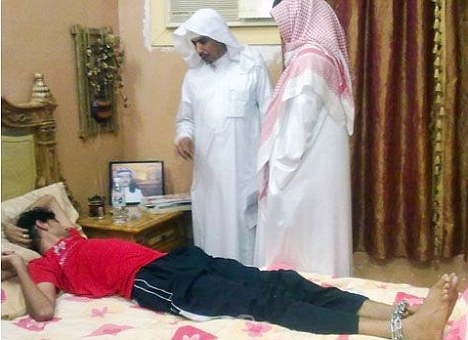 Evil spirits: Turki, 29, lies chained on the bed in the basement apartment where he has been for six years after being 'possessed by a genie'

When Turki first began behaving bizarrely, his father took him to local Muslim clerics to recite the Koran over him.

'But most of them became scared when they heard the female voice telling them that she was a royal jinn (genie) and that no-one can exorcise her unless Turki dies,' his father said.

One cleric advised him to shackle his son’s arms and legs in chains and read the Koran to him.

DREAM OF A GENIE THAT IS MORE LIKE A NIGHTMARE

Most Westerners know the term genie from the tale of Aladdin and his magic lamp or the hit 1960s sitcom, I Dream of Jeannie. 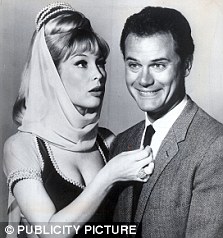 But genies, or jinn, in Islamic theology can be much more sinister. Some are good, others bad.

They are believed to be normally invisible but have the ability to assume human or animal form and are often said to be motivated by jealousy or revenge.

'We did this. My son became quiet but is totally unaware of what is happening around him. He does not talk and is now unable to harm anyone,' Turki’s father told Arab News, an English language Saudi daily.

But genies, or jinn, in Islamic theology can be much more sinister. Some are good, others bad.

A Saudi family last year took a 'genie' to court, accusing it of theft and harassment.

The jinn was said to have terrified the children by throwing stones, stealing mobile phones and speaking in male and female voices.

Turki lives in a tiny, two-room basement apartment with his impoverished mother and her three other children in the holy city of Mecca. They survive on £150 a month from social security.

His parents divorced before he was 'possessed'.

Turki’s father claimed he himself was afflicted by a jinn at the age of nine and suffered for more than four decades until it was exorcised by a cleric.

'I used to see a woman who would at times appear very beautiful and at times extremely ugly,' he said.

On some occasions she was 'surrounded by fire' and on others appeared 'with animal limbs'.

A Saudi human rights activist and professor in Sharia (Islamic law) who visited Turki found him to be in a 'semi-coma'.

Muhammad Al-Suhali said Turki 'did not know what was going on around him. He could not eat, drink or use the toilet without the help of others'.

The professor added that when started to read some Koranic verses, Turki became furious and shook until he nearly fell out of his bed.

'When I stopped reciting, he became quiet again but was distant and unaware of what was happening,' Suhali told Arab News.

He praised Turki’s young wife for staying with him despite his frightening condition.

Suhali called on Saudi Ministry of Social Affairs to provide the family with better accommodation and to include Turki in its social security programme.

The comments below have been moderated in advance.

The views expressed in the contents above are those of our users and do not necessarily reflect the views of MailOnline.

We are no longer accepting comments on this article.

From the Makers of Candy Crush

Part of the Daily Mail, The Mail on Sunday & Metro Media Group