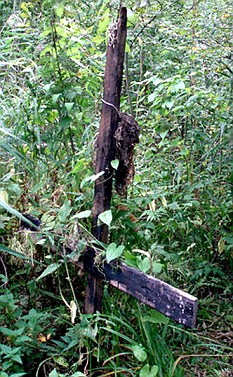 Vile: An upside-down cross marks the spot where the four Russian teenagers were ritualistically slaughtered

A gang of Satan worshippers murdered four teenagers by stabbing each of them 666 times, police believe.

The number of wounds is the same as that revered by followers of the devil.

The three girls and one boy, all described as Goths and aged 16 and 17, were allegedly forced to drink alcohol by the gang before they were attacked.

The killers then allegedly lit a bonfire under a tree near their cottage in Russia's Yaroslavl region, 300 miles north-east of Moscow, where they cooked and ate their victims' body parts.

The remains of Anya Gorokhova, Olga Pukhova, Varya Kuzmina and Andrei Sorokin, who went missing from their homes in June, were discovered last month.

The body of a small rodent crucified on an upside-down cross was also found.

After arresting eight people in connection with the murders, police realised all four victims had made phone calls to the flat of alleged gang leader Nikolai Ogolobyak, a former church choir boy.

One of those arrested is alleged to have told police: 'Satan will help me to avoid responsibility, I made lots of sacrifices to him.' Another, Alexander Voronovic, claimed the gang had previously dug up a grave and eaten the heart of the girl buried there.

One of the gang, when asked what made him do it, is claimed to have said: 'I tried to turn to God, but it didn't bring me any money.

'I prayed to Satan, and things improved.'

Teachers of the accused told detectives that most had been moody at school and were of lower than average intelligence.

All the dead knew Ogolobyak and other members of the gang.


Andrei's father said last night: 'My son said he had Goths and Satanists among his friends.

'I wasn't scared. I thought, "Well, let him spend his time sitting around in a cemetery, there's not much harm in that is there?"'

No comments have so far been submitted. Why not be the first to send us your thoughts, or debate this issue live on our message boards.

We are no longer accepting comments on this article.

From the Makers of Candy Crush

Part of the Daily Mail, The Mail on Sunday & Metro Media Group